❀`•.¸¸.❀`•.¸¸.❀ More About  PEONIES ❀`•.¸¸.❀`•.¸¸.❀
China ... Perhaps the best place to begin the story of peonies in the garden is in China. Peonies were known in China as far back as perhaps 1000 BCE. It was not however until the seventh century, during the reign of the Emperor Yang (605-617) of the Sui dynasty, that peonies were thought to have been grown as ornamental plants.

During the T'ang dynasty that followed (618-906) peonies supposedly beca...me very popular in the imperial gardens and they were put under imperial protection. The best varieties commanded huge prices and peonies were often part of a dowry settlement.

As new dynasties began and emperors moved their courts, peonies were also moved, adding to the widespread cultivation of peonies throughout China.

During the Ch'ing dynasty of 1644 to 1911 the city of Caozhou like Louyang, became a centre for peony culture. Today this city is known as HeZe and is recognized as the other major peony centre in China. Like Louyang, HeZe holds an International Peony Fair each year in April.

Chinese horticulturists were the first peony breeders and their work lead to the introduction of many huge, double flowered tree and herbaceous peonies. It is believed that during the twelfth century, Chinese horticulturist began using grafting techniques to reproduce valued cultivars.

In HeZe and Luoyang alone there are more than 800 hectares dedicated to peony production.
HeZe  possesses a state funded research facility dedicated to research into peony. 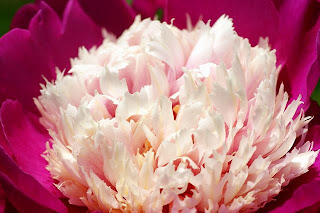 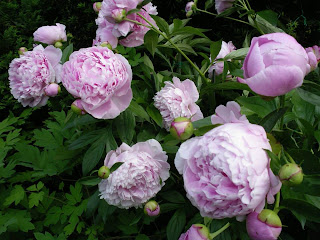 Magnolia also known as "Yoloxochitl" Is a large genus of about 210 flowering plant species in the subfamily Magnolioideae of the family Magnoliaceae. It is named after French botanist Pierre Magnol. 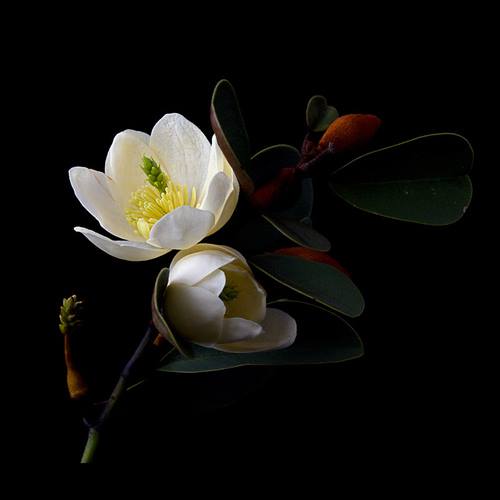 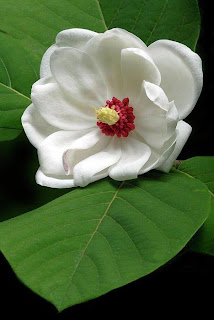 Precocious than the stamens pistil, natural seed, while the tiller is strong, multi-layering and dividing propagation method. Sometimes with planting spring and autumn can be carried out, the mother plant were dug branches dense planting and pruning stubs roots and branches. Layering, choose a biennial branches in early spring can be used bulldozers or buried strip method of reproduction. It takes  20-30 days to germinate. 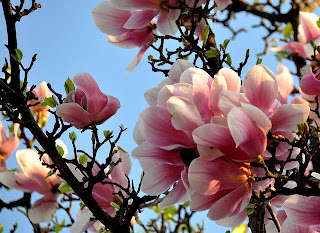 Flowers are a proud
assertion that a ray of beauty out
values all the utilities of the world .
Shared by ~ Lhynn ~

The Red Bolivian Fuchsia (Fuchsia boliviana)
Is a gorgeous, rare species from the Andes mountains that turns any garden into an exotic rain forest! Practically all year, this large, tree-sized Fuchsia sends down long, hanging clusters of 4 inch flowers of a vibrant fluorescent red. After flowering, it makes tasty, red fruits! This is an extremely showy species that deserves center-stage in the garden.
The ancient Incas cultivated this exotic plant centuries ago, and the fruits are still sold in South American markets today. They taste sort of like Kiwi fruit or grapes, but not as sweet. Indoors, you'll need to pollinate the flowers with a paint brush if you want to get fruit. While the berries aren't as sweet as typical fruits, they're fun to munch on whenever passing by it! 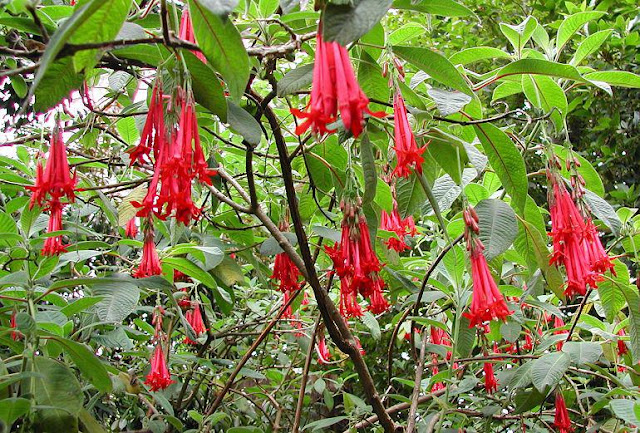 ╭┈┈⊰✿ Amaranthus caudatus ✿⊱┈┈╮
Amaranthus caudatus ~ is a species of annual flowering plant. It goes by common names such as love-lies-bleeding, love-lies-a'bleeding, pendant amaranth, tassel flower, velvet flower, foxtail amaranth, and quilete.
Many parts of the plants, including the leaves and seeds, are edible, and are frequently used as a source of food in India and South America — where it is the most important Andean species of Amaranthus, known as kiwicha. (see also Andean ancient plants) This species, as with many other of the amaranths, are originally from the American tropics. The exact origin is unknown, as A. caudatus is believed to be a wild Amaranthus hybridus aggregate.
The red color of the inflorescences is due to a high content of betacyanins, as in the related species known as "Hopi red dye" amaranth. Ornamental garden varieties sold under the latter name are either Amaranthus cruentus or a hybrid between A. cruentus and A. powelli. In indigenous agriculture, A. cruentus is the Central American counterpart to South American A. caudatus. ╭┈┈⊰✿ shared by Lhynn ✿⊱┈╮ 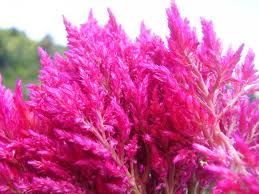 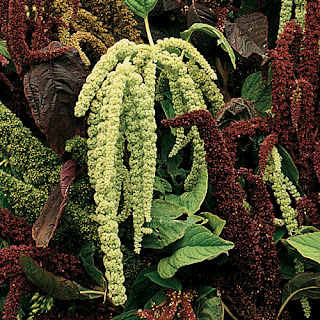 Green Amaranthus Caudatus
Posted by Lhynn de G. at 9:30 AM No comments:

✿⊱┈┈╮✿╭┈┈⊰✿Dianthus caryophyllus ~ or Carnations ✿⊱┈┈╮✿╭┈┈⊰✿
❥• ▓▒░ FLOWERS FROM ME TO YOU.░▒▓ •❥
Carnation (Scientific name: Dianthus caryophyllus) that carnations, also known as Lion's Head carnation, As Caryophyllaceae, Dianthus genus, distributed in temperate Europe and mainland China, Fujian, Hubei and other places, native to the Mediterranean region, is the world's one of the most popular flowers.
As the name carnation flowers, Carnation is the English transliteration of the word, it is a massive planting of Caryophyllaceae, Dianthus perennials, is a rose. Normally open double flower, color and diverse, colorful, aromatic scent. Carnation is one of the most popular cut flowers, representing healthy and beautiful. Available for flower arranging, brooch and so on.
Dianthus caryophyllus  ~ or Carnations  (Clove Pink) is a species of Dianthus. It is probably native to the Mediterranean region but its exact range is unknown due to extensive cultivation for the last 2,000 years. It is the wild ancestor of the garden carnation.

In 1907, began with a pink carnation as a symbol of Mother's Day, so this is often used as dedicated to his mother flowers.
✿⊱┈┈╮╭┈⊰✿ ✿⊱╮ Lhynn ╭⊰✿ ✿⊱┈╮╭┈┈⊰✿ 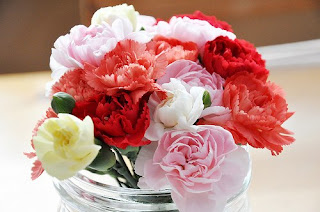 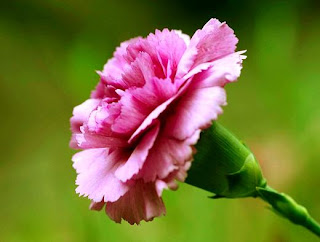 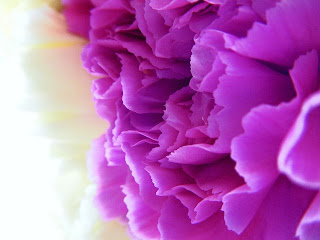 ✿⊱┈┈╮✿╭┈┈⊰✿ THE PEONY ✿⊱┈┈╮✿╭┈┈⊰✿
❥• ▓▒░ FLOWERS FROM ME TO YOU.░▒▓ •❥
In Japan, Paeonia lactiflora used to be called ebisugusuri ("foreign medicine"). In kampo (the Japanese adaptation of Chinese medicine), its root was used as a treatment for convulsions. It is also cultivated as a garden plant. In Japan Paeonia suffruticosa is called the "The King of flowers" and Paeonia lactiflora is called the "prime minister of flowers."
Pronunciation of 牡丹 (peony) in Japan is "botan." Before the Meiji period, meat taken from quadrupeds was seldom consumed in Japan due to Buddhism. Thus in cases where such meat was handled, it was paraphrased using the names of flowers. The term botan was used (and is still used) to paraphrase wild boar meat. This comes from the flowery resemblance of the sliced meat when spread over a dish. Another example is sakura (cherry blossoms) which stands for horsemeat.
The peony is named after Paeon (also spelled Paean), a student of Asclepius, the Greek god of medicine and healing. Asclepius became jealous of his pupil; Zeus saved Paeon from the wrath of Asclepius by turning him into the peony flower.
The family name "Paeoniaceae" was first used by Friedrich K.L. Rudolphi in 1830, following a suggestion by Friedrich Gottlieb Bartling that same year. The family had been given other names a few years earlier. The composition of the family has varied, but it has always consisted of Paeonia and one or more genera that are now placed in Ranunculales. It has been widely believed that Paeonia is closest to Glaucidium, and this idea has been followed in some recent works. Molecular phylogenetic studies, however, have demonstrated conclusively that Glaucidium belongs in Ranunculaceae, but that Paeonia belongs in the unrelated order Saxifragales.
✿⊱╮╭⊰✿ ✿⊱╮ Lhynn ╭⊰✿ ✿⊱╮╭⊰✿ 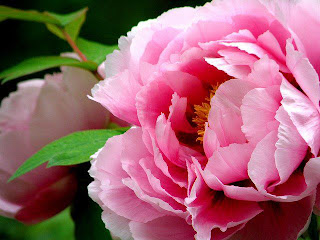 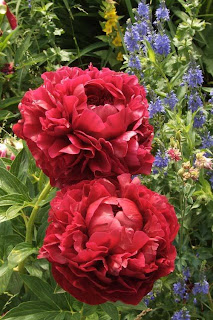 ✿⊱┈┈╮✿╭┈┈⊰✿ ~ PANSY ~ ✿⊱┈┈╮✿╭┈┈⊰✿
The flower symbolism associated with the pansy is merriment and you occupy my thoughts. The pansy is also called the heartsease or Johnny Jump Up. The name pansy is derived from the French word pensée meaning "thought", and was so named because the flower resembles a human face. In August the pansy is thought to nod forward as if deep in thought..
✿⊱┈┈╮╭┈⊰✿ ✿⊱╮ Lhynn ╭⊰✿ ✿⊱┈╮╭┈┈⊰✿ 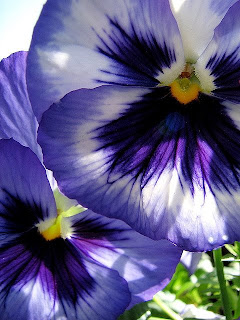 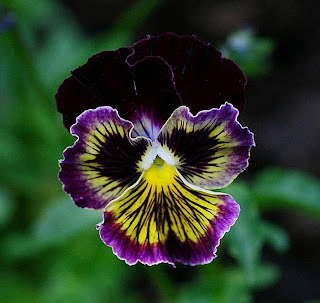